AND MANY MORE CONFIRMED FOR OCTOBER 24 & 25 FESTIVAL

AT GIBSON RANCH NEAR SACRAMENTO, CA

The fourth annual Monster Energy AFTERSHOCK Festival will feature a spectacular music lineup of hard rock, alternative and metal artists, as well as an expanded festival site with onsite camping Saturday, October 24 and Sunday, October 25 at its new home at Gibson Ranch just outside Sacramento, CA. In addition, the festival will feature live, in-ring matches with WWE’s NXT Superstars.

Corey Taylor of Slipknot says, “We are really looking forward to playing AFTERSHOCK in Sacramento! A lot of great bands–can’t wait to see everyone, from Manson to Clutch. Sacramento won’t know what hit it when me and my friends are through.”

Deftones’ Chino Moreno says, “We’re looking forward to being one of the headliners at AFTERSHOCK this year and performing in our hometown.  It’s always special to return to the city that made us.”

In addition to music performances, Monster Energy AFTERSHOCK will feature live, in-ring matches with WWE’s NXT Superstars.  NXT is WWE’s developmental division based out of the state-of-the-art WWE Performance Center in Orlando, Florida. Over the past two years, NXT has grown into one of the hottest sports entertainment brands in the world, featuring incredible athleticism and compelling storylines that can be seen every Wednesday night at 8 PM ET on the award-winning WWE Network.

A special “Pre-Shock” discounted Weekend Ticket pre-sale for Monster Energy AFTERSHOCK will begin on Wednesday, May 27 at 10:00 AM PT and run through Sunday, May 31 at 11:59pm PT (or when pre-sale tickets sell out) at www.AFTERSHOCKConcert.com/Tickets, with regularly priced tickets going on sale Monday, June 1. See below for more details.

The daily band lineup for Monster Energy AFTERSHOCK is as follows:

Monster Energy AFTERSHOCK producer Danny Wimmer of Danny Wimmer Presents explains, “I loved Discovery Park as a venue. But after two straight years of selling out, there was no room left to grow the festival. Like Discovery Park, Gibson Ranch is a beautiful space that will keep the natural feel of the festival grounds but also gives us room to add new experiences such as camping, Tequila World and the Jack Daniel’s mobile museum. And I am particularly excited about bringing WWE’s NXT brand to AFTERSHOCK. After attending WrestleMania® last year, I knew NXT was a perfect fit. WWE has been a part of mainstream entertainment and pop culture for years and has always been connected with the world of music.  NXT’s energy is a phenomenal match for AFTERSHOCK.”

The Jack Daniel’s Experience mobile museum will bring a “Taste of Tennessee” to Sacramento this year. Visitors will learn who Mr. Jack Daniel was and how he ended up with the best selling whiskey in the world. Guests will also see (and smell) whiskey dripping slowly through charcoal and the new oak barrels used in maturing Tennessee’s finest whiskey.

“The Monster Energy AFTERSHOCK Festival has proven itself as a tidal wave of economic impact for Sacramento,” said Mike Testa, COO of the Sacramento Convention & Visitors Bureau. “It drives thousands of hotel room nights to the city and county, directly spends close to a million dollars at local businesses, and provides millions of dollars in overall economic impact to the region.”

A special “Pre-Shock” discounted Weekend Ticket pre-sale for Monster Energy AFTERSHOCK will run from Wednesday, May 27 through Sunday, May 31 (while supplies last) at www.AFTERSHOCKConcert.com/Tickets. During the pre-sale, a limited number of discounted Weekend General Admission tickets will be available for purchase. The Pre-Shock ticket prices are as follows:

Camping and hotel packages, as well as discounted VIP tickets and General Admission ticket 4-packs, will also be available for purchase during the Pre-Shock pre-sale. Visit www.AFTERSHOCKConcert.com for details and pricing.

Regularly priced weekend tickets go on sale Monday, June 1 at 10:00 AM PT at www.AFTERSHOCKConcert.com/Tickets, www.Ticketmaster.com and at all Ticketmaster outlets. Ticket prices will be as follows: 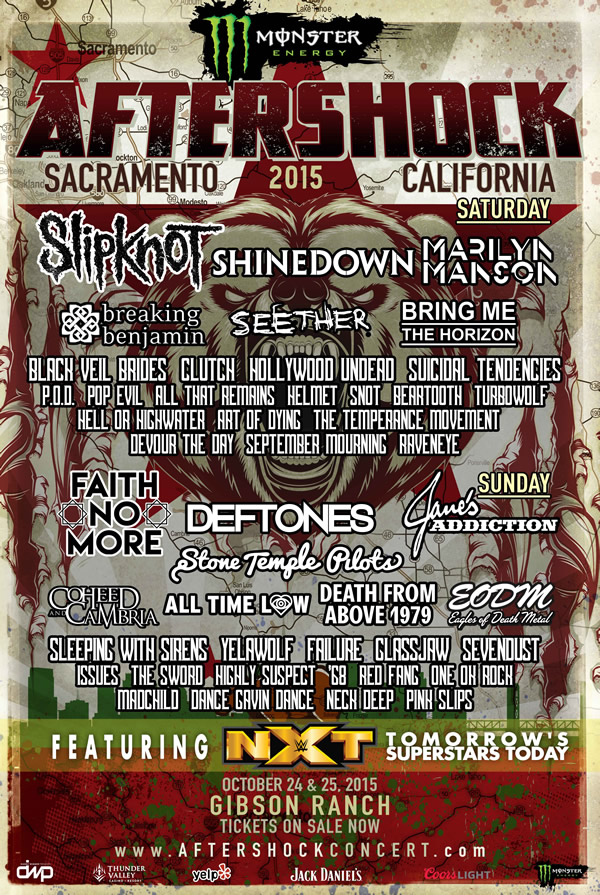 About Danny Wimmer Presents: Since 1995, Danny Wimmer has created, developed and produced events from the club level to multi-day festivals. Founded in 2007 by industry veteran Wimmer, Danny Wimmer Presents produces some of the largest U.S. festivals in the rock and alternative landscapes. By merging well-known talent with local cuisine and culture, DWP has become recognized within the industry for delivering the highest-quality, exceptional value entertainment experiences to customers, artists, sponsors, partners and host cities alike. Never satisfied with the status quo, DWP strives to create memorable and fulfilling concert experiences leaving both consumers and partners with lasting and meaningful impressions. Over the past six years, DWP has grown — while constantly innovating its production, promotion and fan experiences — from a partner in one single event to producing sold out events across the country, doubling its number of produced events between 2012 and 2013 alone. DWP plans to add as many as five new music festivals in 2015 to its already stellar portfolio, which includes Rock On The Range, Monster Energy AFTERSHOCK Festival, Monster Energy Welcome To Rockville, Monster Energy Carolina Rebellion, and LOUDER THAN LIFE, among others.

About Monster Energy: Most companies spend their money on ad agencies, TV commercials, radio spots, and billboards to tell you how good their products are. At Monster Energy, we chose none of the above. Instead we support the scene, our bands, our athletes and our fans. We back athletes so they can make a career out of their passion. We promote concert tours, so our favorite bands can visit your hometown. We celebrate with our fans and riders by throwing parties and making the coolest events we can think of a reality. www.monsterenergy.com; www.facebook.com/monsterenergy

About NXT: Over the past two years, NXT has grown from WWE’s developmental system into one of the hottest sports entertainment brands in history. Seen every Wednesday night at 8 PM on WWE Network, NXT features incredible athleticism and compelling storylines. Recently, NXT Superstars performed to capacity crowds in San Jose, Columbus, Cleveland, Albany and Philadelphia. NXT Superstars and Divas train out of the state-of-the-art WWE Performance Center in Orlando, Florida. The 26,000 square-foot facility offers a full training experience with real time feedback from WWE coaches, trainers and doctors, giving performers the resources they need to develop their talent both athletically and creatively. The future is now for NXT!